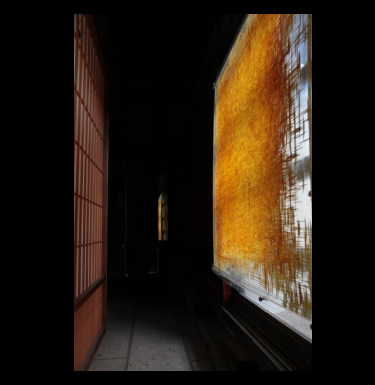 What could be more plain and less sophisticated than a storehouse, a building for storing things? There is hardly anything less aesthetic-driven than a structure for preserving foods and household items when they are not in use: massive clay walls to prevent fire, minimal windows to maintain temperature, unnecessary supports removed to maximize storage space, and darkness to reduce heat. Attached to the main house for utilitarian reasons, a traditional Japanese storehouse seems to exist as an expression of pure function.

Cousteau Tazuke is a painter who uses acrylic resin material to create "hyper-structural" works that subvert the basic principles of two-dimensional art. Tazuke makes his pieces by carving into a clear acrylic resin surface and painting the resulting cavities with acrylic paint. The works are then exhibited with the reverse side facing out. Thus Tazuke undermines the strict borderline between painting and sculpture by combining the techniques of both: his work is a result of via a pore (to apply) as well as via a lavere (to extract). He creates three-dimensional works (there is volume, material "objectness," physical depth), but these paintings still portray two-dimensional space (they are planes, surfaces, it is "on-the-wall work"). Tazuke, while staying inside the realm of painting, manages to work with depth, physical volume, and multiple surfaces to overcome the back/front dualism of a picture by presenting both sides of painted object.

By bringing Tazuke's "Works with acrylic resin surface" into a sake storehouse (Sakagura) in Kamakura, the ancient capital of Japan, we are going to create an Enigmatic Moment, a moment when past encounters future, a moment when paintings made of Methyl Metacrylate thermoplastics (invented less than 30 years ago) are exhibited on clay walls and wooden bars more than one century old, a moment when an artwork with intricate, futuristic topology is exposed inside the dark, cool structure of a storehouse that exhibits centuries of Japanese building tradition. It is this moment when two incompatible artifacts meet to reveal their hidden commonality that is the topic of this exhibition: architectural / sculptural / structural features of both the Japanese storehouse and Tazuke's paintings, which are external to any utility, beyond any daily functions, outside any pragmatic ideas of "use," "convenience," "capacity," or "service."

The "Structure beyond Function" exhibition is based on the scheme of the "two person exhibition" or the "comparative exhibition." Although we show works of art by a known artist in combination with an anonymous work of architecture, we still would like to offer the visitor "parallel, but interwoven" experiences of the aesthetic power of these presented structures.

Tazuke's acrylic resin paintings, because of being work of art (originally functionless creations), make the utilitarian aspects of the storehouse secondary and its aesthetic strengths come to the fore. The moment the storehouse stores art works, it comes to life and it is dragged from ordinary function to the unrestricted imagination of the art world. We suddenly recall that the storehouse, due to its utilitarian darkness, silence, and the lack of escape routes, often served as a main site for the punishment of misbehaving children. Generations of mischievous boys and girls spent time in this type of structure struggling with their youthful imagination, which projected their deepest fears into the dark space at the heart of the building. Also due to the absolute separation between "outside" and "inside," necessary for the preservative purpose of the building, the storehouse became a rather common place for crime, to the point of being noticed and described as such by Japanese artists. Thanks to its simple construction and minimal decoration, any slight alteration paradoxically became a strong message: declaring the wealth of a family or the status of a samurai or merchant in their battles for authority. In spite of their utilitarian origins, the structure of the storehouse and its internal space both communicate a strongly artistic and imaginative expression.

Thus, the "Structure beyond Function" exhibition aims to show that even a minimalist construction - insofar as it is made by a human being - contains a flash of creativity within it.

Additional information about the Storehouse:

The Storehouse was originally situated in Akita prefecture, Yuzawa city, which is famous for sake of a superior brand called “Ononosato”. It was used for producing sake of famous liqueur-maker Takaku-Shuzo. The plate which was found at this building before it was moved to the present location indicates year 1888 (Meiji-era 21). It means that this construction saw the great fire of Yuzawa-city in 1925 and stood through earthquakes, winds and snowstorms for more than 1 century.

Great structure of this storehouse was in good state and its main elements are parallel pillars 15cm in diameter, which are situated is 60cm span and are made from a chestnut tree (hinoki tree), and 18m long ridgepole made from huge Japanese cedar tree.
Due to modern massive constructions around the storehouse the conditions for it preservation became inappropriate so the decision to deconstruct the building was made by the owner and head of "Takaku-Shuzo" Company, Takaku Masayoshi.
Takumi Osawa, who was a member of JMRA (Japan Minka Revival Association) got to know about these plans. He contacted Yoshiro Tanaka, who was thinking about moving Storehouse in Kamakura and turning it into dwelling house. They applied to the government of Yuzawa-city and reached the agreement about the transfer of the building.

In the end of 2002, O Sekkei Inc. and its head Takumi Osawa initiated the plan of restoration. After research, dismantlement, planning, transportation, construction on March, 2005 the storehouse found its new place where it stays till now. 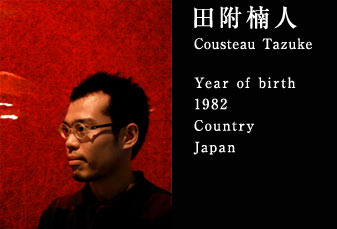 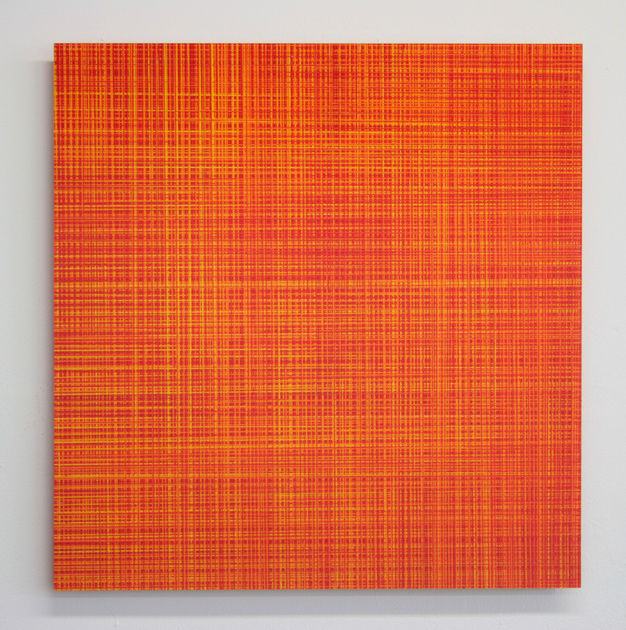 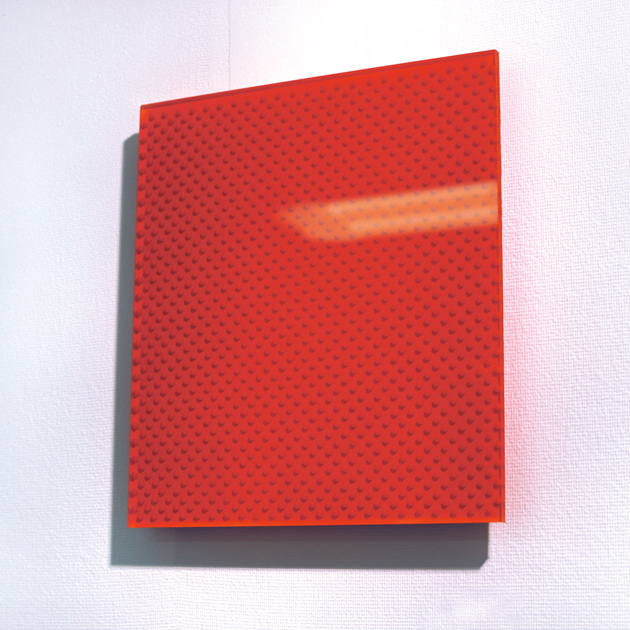 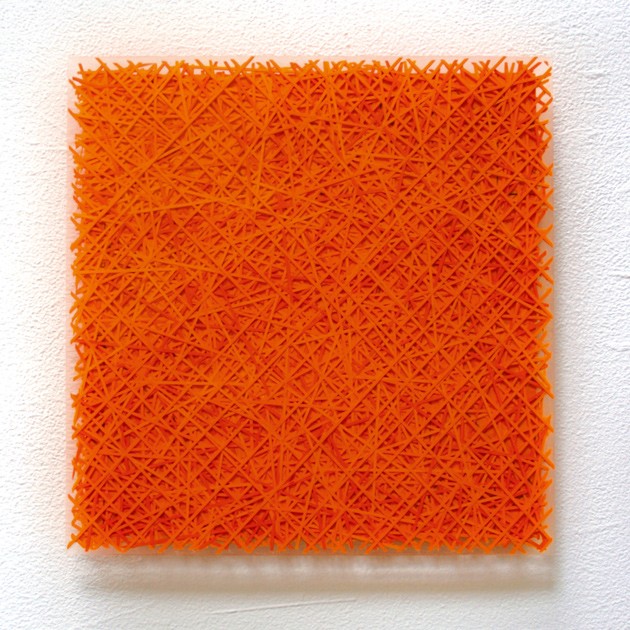 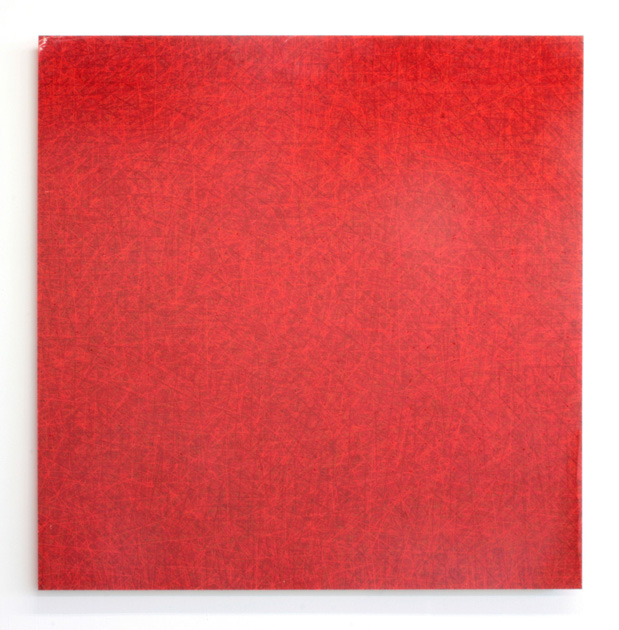 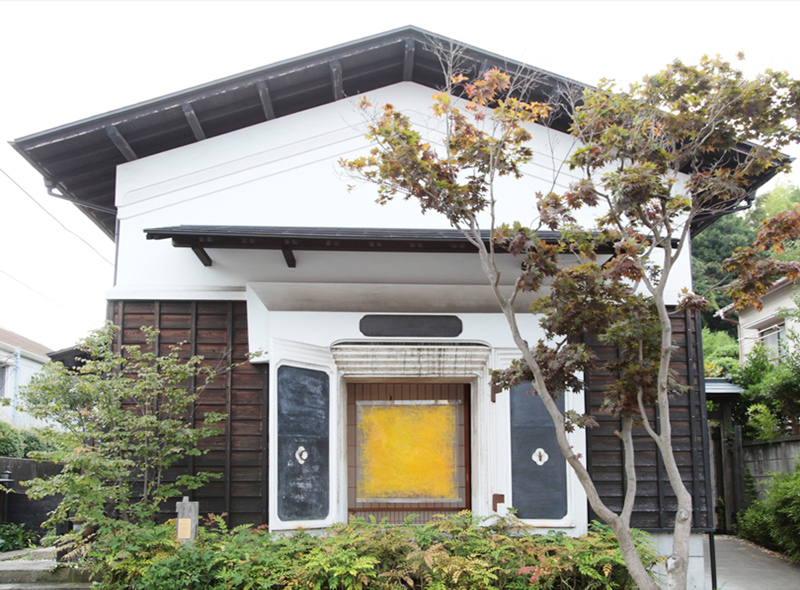 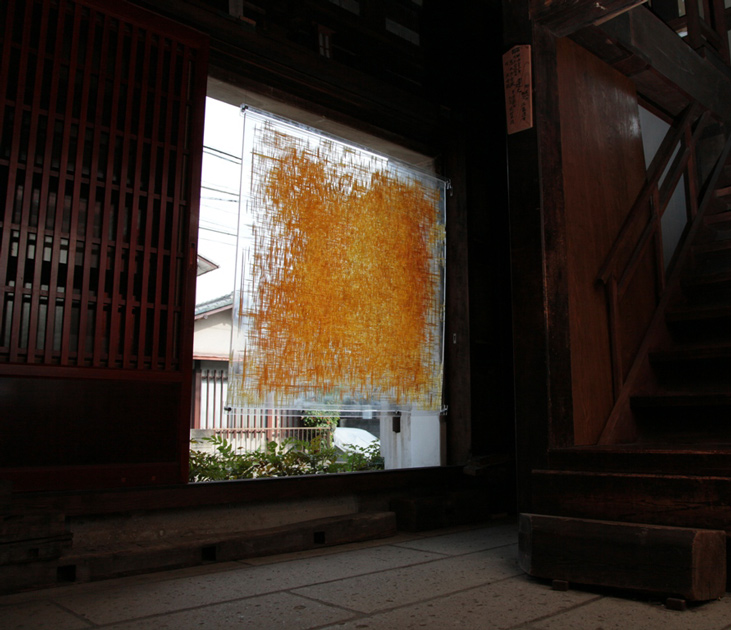 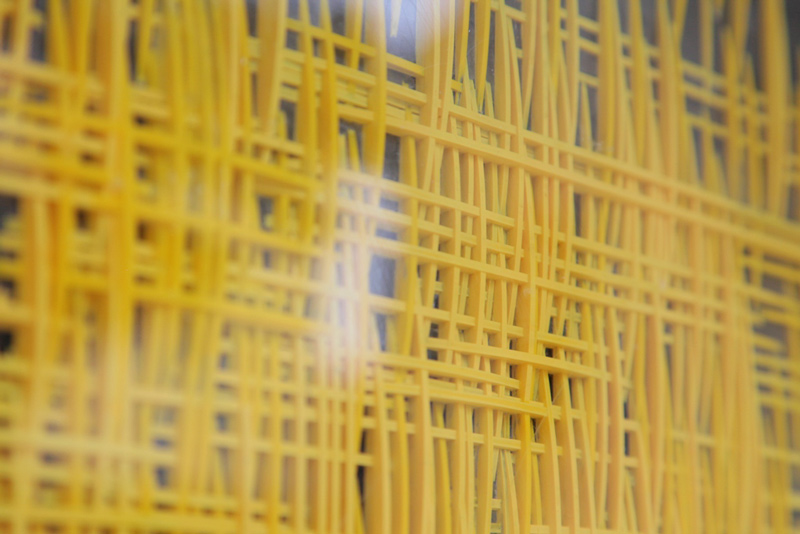 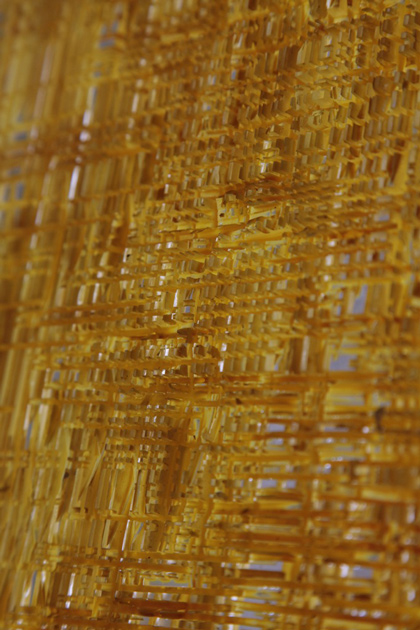 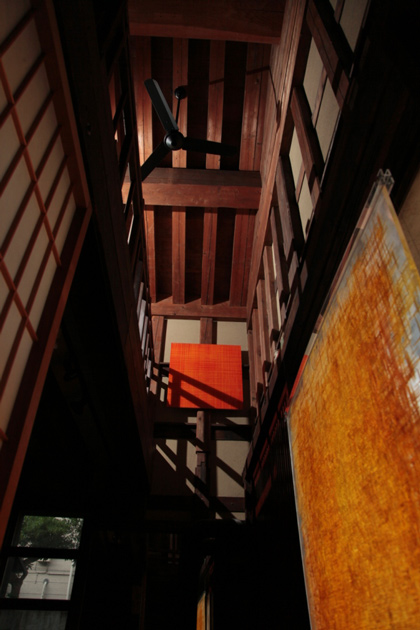 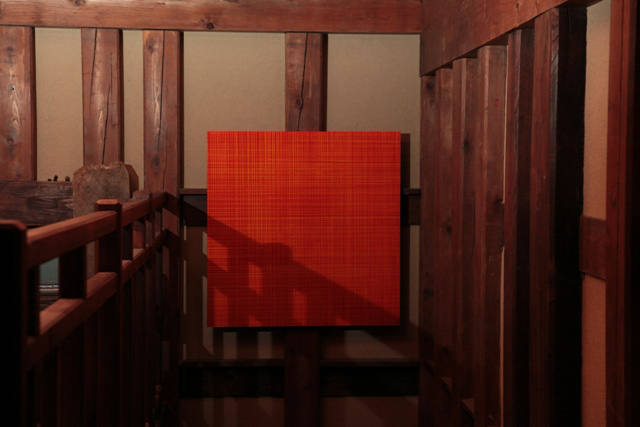 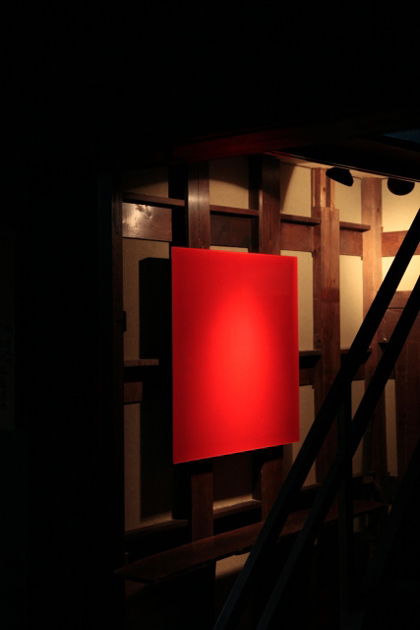 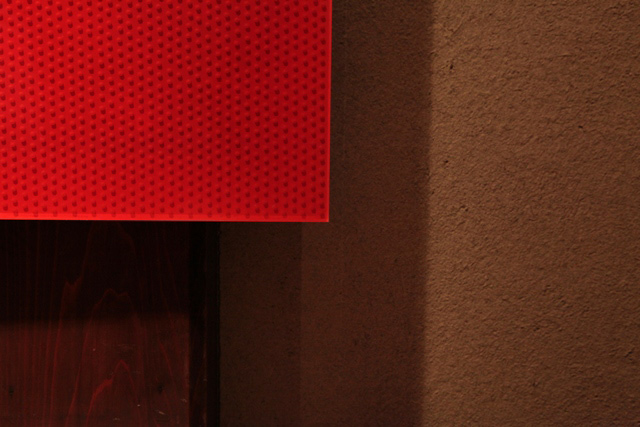 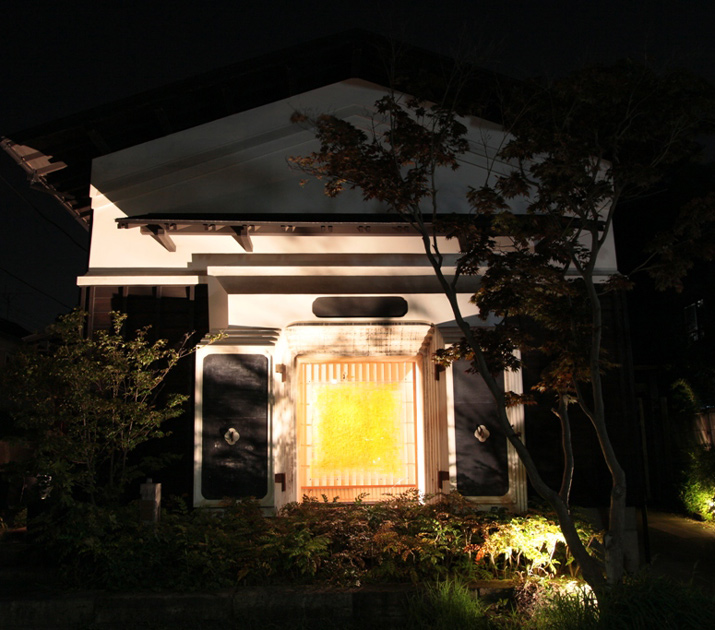